Genome editing is the precise modification of a DNA sequence by using certain proteins (nucleases) able to cut the double helix in targeted locations. The most promising method is called CRISPR/Cas9 because protein Cas9 is typically employed. The technology name is shortened to CRISPR and pronounced “crisper”(explaining the acronym origin would lead us too far). Cas9 must be equipped with a RNA guide in order to finds its target. The system works as a Swiss army knife provided with positioning compass, vise to grip the DNA, scissors to cut. Broken ends are then fixed by the natural repairing mechanisms in the cell. The way they are repaired can affect function by introducing point mutations indistinguishable from natural ones and useful to silence a faulty gene. Alternatively a DNA template can be used to edit the gene letter by letter in order to make it functional, or a new DNA sequence can be inserted to add a desidered trait. These tricks are invaluable for scientific research, for example to investigate models of human disease. As CRISPR works in vitually any organism (from bacteria to humans) potential applications are almost limitless. Areas of research in biomedicine include pharmaceutical development, xenotransplantation, gene and cell-based therapies, control of insect-borne diseases. Correction of genes in human embryos (germline editing) would be highly controversial and is not endorsed by most scientists. Applications in other species range from agbiotech (i.e. crops modified for stress tolerance without compromising taste and nutritional value) to industrial production (e.g. new generation biofuels). Benefits, risks and ethical considerations vary in different fields/products and should be assessed on a case-by-case basis. 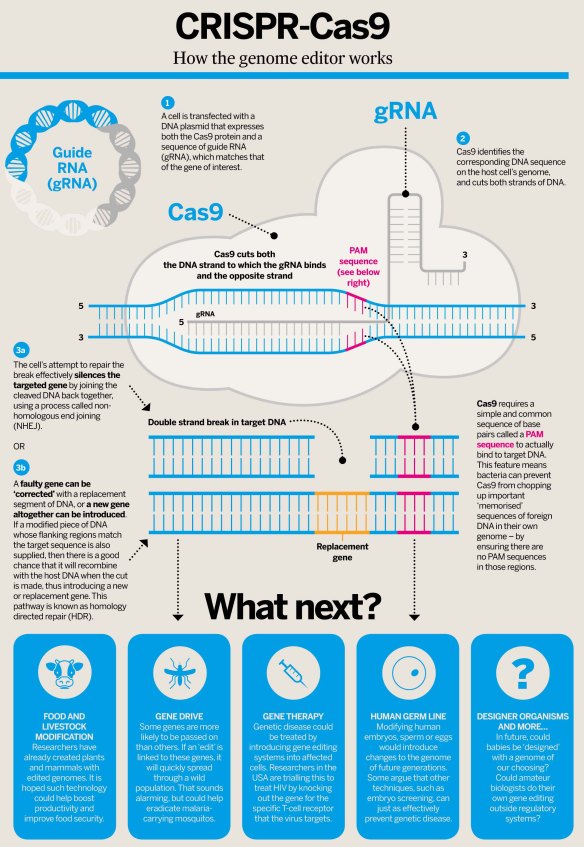